Winner of the Grand Prize for 2017 Kazuo Hisumi Promotion of Information Distribution Award
Kazuo Hisumi Promotion of Information Distribution Award was founded to recognize the efforts and throws light onto the media, journalists and private individuals engaged in the field of information communication whose activities are focused on the freedom of expression, the disclosure of information and people’s rights to know. The grand prize award for 2017 was decided to be awarded to Minna no Data Site Project. This project has been conducting measurements and accumulations of soil that have been contaminated by the effect of the accident at TEPCO’s Fukushima Daiichi Nuclear Power Station. It was recognized for the summarization and disclosure of scientific data accumulated from a wide-spread contaminated area of 17 prefectures and city in East Japan, in ways that were understand comprehensible to everybody.
The encouragement award was given to Mr. Takashi Ozaki, a photographer who repeatedly gathered information about the members of SEALDs (Students Emergency Action for Liberal Democracy.) The special award went respectively, to Mr. Makoto Kimura, a city council member of the city of Toyonaka, for his repeated disclosure of information pertaining to the Morimoto Gakuen Scandal, and to Ms. Miyuki Ohara, who is the original proposer of “Kokkai Ondoku” which is a means to read aloud the questions and answers in the Diet on conspiracy that don’t quite bite evenly.
(Recipients)
Grand Prize Award : “Minna no Data Site activities (co-representatives : Mr. Hidetake Ishimaru, Mr. Hiromi Abe, Ms. Shoko Onuma)
Encouragement Award : Information gathering on SEALDs members (Mr. Takashi Ozaki)
Special Award : Investigation an information disclosure pertaining to Morimoto Gakuen Scandal (Mr. Makoto Kimura)
Special Award : “Kokkai Ondoku” Activity (Ms. Miyuki Ohara)
(Awarding Ceremony)
Date : Friday, December 15th(18:30~)
Place : Hibiya Convention Hall
(1-4, Hibiya Koen, Chiyoda-ku)
The Fifth Kazuo Hisumi Promotion of Information Distribution Award : List of Recipients
Grand Prize Award ( given to 1 party, extra prize 300,000 yen)
Activities of “Minna no Data Site”(co-representative: Mr. Hidetake Ishimaru, Mr. Hiromi Abe, Ms. Shoko Ohnuma)
(Reason for the Awarding)

Minna no Data Site conducted a public participation style project by involving the citizens to collect, measure and accumulate the soil that are contaminated by radioactive substances caused by the accident at TEPCO’s Fukushima Daiichi Nuclear Plant, and plotting the result data on the map for easy comprehension. This project was chosen for the intelligible disclosure of scientific data constantly standing on the people’s side. The contamination data accumulated and disclosed were derived from soil collected by the hands of the citizens that were widely called upon, from a widespread area of 17 prefectures and city.
Thank you! A report of the celebration even of completion the soil measurement project. 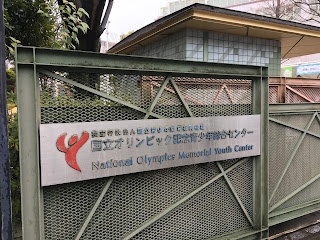 For 2 and half years, we have conducted free charge measurement for soil samples from 17 prefectures in the North East side of Japan. Thank you so much for your support financially and also collecting the soil samples.

Finally, we have achieved to create a map of cesium contamination level in those areas by measuring more than 3,000 soil samples. We would like to show our sincere appreciation for your all, so we organised reporting and sharing event.

On the day, it was raining but approx. 150 people joined us.

Out of 33 measurement stations that belongs to “Minnna no Data Site (MDS)”, 13 measurement station joined us. Also 11 guest organisation which have been working to protect children from radiation have joined us and held their own booth. Below is the report of the event.

2 and half years of development of the Soil measurement project: introduction of the measurement stations

We introduced the history of MDS and how the project was carried out using slide presentation. Also we introduced 13 measurement stations which joined us on the day.

Some of the feedback we received from the participants were “I was impressed to meet all the people who is involved in this activities” and “I could understand how the project has developed and spread out”.

Introduction of the measurement stations 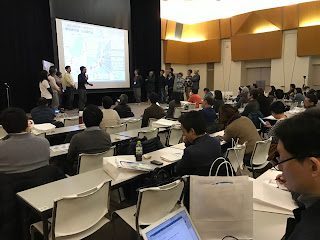 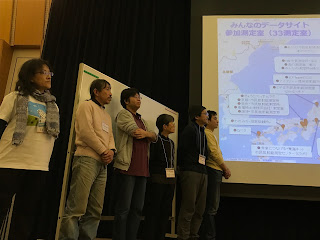 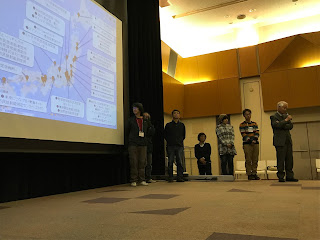 Tho it was a short time, we could share the different situations of measurement stations by regions.

Introduction of the guest organisation booths and mingling and purchasing time

After the introduction of the guest organisation and what they have in their booth, we held mingling time. Many people enjoyed buying DVD, books and cute items from the booths.


all of the profits from the crafts go into recreation project 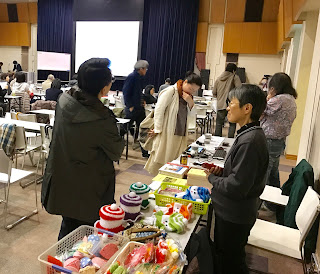 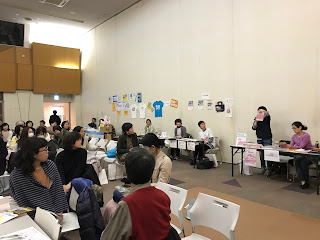 A small concert was held by singer Nuu and Guiter who sang ending song for “Little Voices from Fukushima” directed by Hitomi Kamanaka.

We could feel the preciousness of lives, sweetness of moments of life by listening to their music.

One of the staff members Nakamura said that she could remember this past 6 years in blink of moment.  She recalled “how she started to get involved in this movement and why she is standing here today”, and remembered “all the uncertainty and determination caused by the accident”. There are so many injustice in the society, but she could received power to still keep holding on by listening to the beautiful voice and melody, and she shed some tears.

A gentle singing by Nuu was applaused by the audience 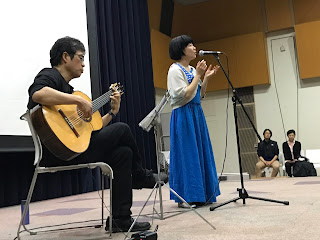 We have carried out this project for 2 and half years over 17 prefectures.
http://en.minnanods.net/soil/

We could gather more than 3,000 soil samples that contributed to data of contamination by cesium in soil. We created prediction map that could tell the situation in 2011 and predictions for 100 years later. Also we compared to situation in Chernobyl and the difference between evacuation standard line in Russia and Japan.

As a outcome of the project we released speculation map of cesium contamination in 2011 until next 100 years. We are working to English version of the map by the end of 2017.

Director Kamanaka talked about the situation around children with thyroid cancer in Fukushima. She also talked about how diseases are increasing in Kanto Area which she heard directly from a nurse. We are waiting for the accurate data from statistics and science. She discussed about how iodine was not distributed to people, and the response by the government at the time.

Soil measurement project by MDS was started by civilians because the government did not put effort in researching and disclosing the informations about the soil contamination. At the end, Ishimaru concluded by saying “Today is not the ending, but the starting point. From now we will discuss and co-operate to think wisely about how to use this data and spread them”.
We received many feedbacks. Here are some of them; “I could understand the importance of knowing the contamination situation well.” or “I could find out many information that I didn’t know”. 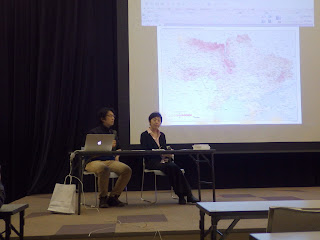 A talk by a person who has self-evacuated


2nd popular content of the day was talk from the evacuee.

There are not many chance where we can listen to evacuee from Fukushima. Also the compensation for self-evacuee by the government which made the rent free of charge was about to be cut in 31st March. In this very busy schedule, she agreed to come and talk.

Mrs Naoko Suzuki evacuated temporally from Iwaki city to Hachioji, Tokyo at midnight of 15th March, 2011. Then someone offered them to stay with them in Saitama, so they moved there.

In the beginning she evacuated with her 2 daughters thinking it will only be for 3 months, so her partner went back to Fukushima. However, single parent evacuation lasted for 2 years.

Family home which they have only been living for 8 years had to be sold after a very tough decision.

Her partner found a job in Saitama, so the family is united again and living together now. However, in Iwaki city, there is a tradition for the oldest son to stay and inherit the household, so only 3 family evacuated out of 600 students in a school, and now only Suzuki’s family is evacuating.

Everyday they live in the guilt for running away, and the longing for the hometown, that lead into hardship of not being able to be honest with each other among family.

However, among all the evacuee, only 20% of them have returned to their hometown, which proves that many of them have feeling that it is still not safe. In that sense, the map’s data helps think about the safety.

Among 370,000 people, 187 children was diagnosed with thyroid cancer. However, the Fukushima government is trying to minimise the need for health check ups. She said “I cannot forgive the response from them. It is important to take action towards what has already happened, so I will study more and I want to raise voice based on concrete data”.  The memorable phrase she said was, “Children are treasure, but parents are also treasure. Evacuee also deserve to be happy. We already reach that time. I would like to keep my head up and keep holding on”.

The East Soil Measuring Project did not include micro hotspot. It was to analyze normal contamination level in each region by creating the map. However, it is impossible to ignore the issues raised by micro hotspots that is prevalent throughout North-East Japan.

From now on, with the support from Hotspot Investigators for Truth (HIT), we will launch “Environmental concentrated bequel measuring project” to measure and disclose datas of micro hotspots.
This project causes risks on health by inhaling exposure when gathering and measuring high level contamination soil, so we are not asking for public to collect the soil.

We will raise awareness of what kinds of places are likely to be hotspot through easy pictures on the website. Website will be released around this May.

features of places/conditions that are likely to accumulate cecium
Under rain drainage (2) puddle (3) roadside (4)edge of parking area (5) inside of gutter (6)lower part of steep slope (7) planter (8)near the roots of tree (9)walls beside buildings (10) black substances: those lichen or blue-green algae on the sides of roads (11)moss (12)dusts 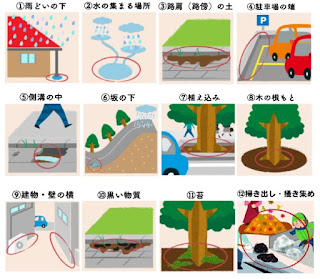 What’s next for MDS

In september, we are planning to publishing finalized version of map with explanations of each regions including missing regions.

We will created in the way so it is easier to see the results from the projects, and look at the contamination situation in the past, present and future.


Also we would like to value the connection we made through this project. We are planning on hosting more events that will gather us together again to think about evacuation, compensation, recreation and protecting children. If you have any ideas, please share them with us.

Below are the organisation who supported to host this event and our daily activities through their funding.
LUSH Japan https://jn.lush.com/
Act Beyond Trust http://www.actbeyondtrust.org/
The Takagi Funds for Citizen Science http://www.takagifund.org/

We thank you deeply to those of you who donated to us directly, through the cloud funding and share and support our project.

We are not finished yet. From now on, we will move on to spread what the data is showing to us.
We look forward working with you more.
We had prepared our English version site for a few months.
And finally we have done it.
http://en.minnanods.net/

"Minna no Data Site" is a site which is making progress time by time.
Please visit us and give us a feedback or support.

We had such a big nuclear power plant accident in march 11 ,2011.
After that ,we have made big efforts to have made things clear around radiation.

In our site, there are a lot of measurement datas by independent measurement labs.
It is very useful and unique.

We are sorry there still remains some non translated parts.
We will try to translate them.